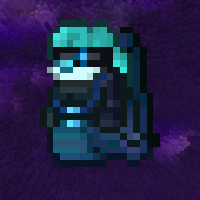 This is the thread for discussion about darkshade.
Links:
The main comic
The bonus pages


Darkshade started as a forumventure here and was later mirrored to MSPFA. The story follows two anomalies, one a living shadow and the other a large amorphous flesh monster. They're great friends.
They're in the process of escaping the place they are contained, known as the Institution.
The story soon switches perspectives to one of a scientist, particularly Doctor Georgia Un. She's like, the vriska of the comic. But not as bad. She really did kill that mind-controlled guy out of self-defense and panic, really!
Also there's a clueless janitor whos name is CJ. He doesn't know what's going on and he hasnt yet realized that the place he works contains anomalies. He has a little bucket friend named Bucket, who is a sentient anomalous bucket that always has a puddle underneath it.
The main antagonist of the story is the Abhorrent Benefactor, although Absolute Bastard is practically a synonym for him. He's an anomaly who makes deals to help people but which more than likely ends up getting them killed. That's why he makes the deals.