Each player can move one piece on their turn. Who moves first is determined by a coin flip at the beginning of the match.

The goal is to capture all the opponent's bois, or capture their 'King' boi - unlike in Chess, the King is not a unique boi. Rather, each side publicly designates which of their bois will be their King for the match. This boi will maintain their usual capabilities.

There are four types of bois - Circles, Squares, and Triangles. The fourth type is called a wild boi, and is designated by the letter H.

The game operates on a rock-paper-scissors type of system.

Circles beat Squares.
Squares beat Triangles.
Triangles beat Circles.
Wilds kill everything in their path, but are also vulnerable to everything.

So if a Circle and a Square fight, the Circle wins. But how do the bois fight? Well it's tied to their movement.

Circles can move one space in any direction. They can fight anyone who's space they can move into.

Squares can move up to three spaces on their turn. They do not have to move their full movement, and they cannot go the same direction twice in a row (ex. the square cannot move three up, nor can it move two up. It must move one up, then change direction, then change direction again. Ex. right-up-right, left-up-diagonalright, etc.)

Triangles can move three spaces as well, but they hop. So they can only move in a straight line (no diagonals), but ignore any boi in the first two spaces of their movement, only taking into account the state of the space they land in. They do have to use their full movement when they choose to move.

Wild bois are wild. They cannot move unless an enemy is within threat range (if they are in check, to use Chess terminology) but when they are able to move, they move horizontally or diagonally until they hit the edge of the board. They will kill every single boi in their path, of both teams until they reach the end of their movement (the edge of the board).

The final thing you need to know about to play with your bois are RANKS. There are 3 levels for each boi except wilds, denoted by colour.

Green is the weakest.
Blue is the middlest.
Red is the strongest.

Having a higher rank than the opponent boi is the only way a boi can overcome its weakness. For example, if a Green Circle were to fight a Red Square, their strengths respectively would be 2-3 (Circle gets 1 for its advantage over Square and 1 from its rank, while Square gets 3 from its rank.)

Wilds have no rank, as they are indiscriminate killers.

There are also items scattered across the board that each side can pickup. They will be explained when obtained. They are denoted with a yellow ?. Items appear and disappear at random, so grab them while you can!

The teams are differentiated by the numbers on the bois. Each team will have either a 1 or 2 on their bois.

The game starts with each side picking their king, who will from then on have a star on top of his number. After this, the coin is flipped.

To move a boi, simply call him out and tell him where to move to (ex. Green Circle on L-12 to K-11). If there is an enemy boi in that space, the two will the fight, and the loser will die. As players, you can command either team, so make sure you're specific about who you want to move and where, or else your command will be disregarded.

Oh and I forgot to mention but if two bois of equal power try and fight, the outcome is decided by a coin flip. 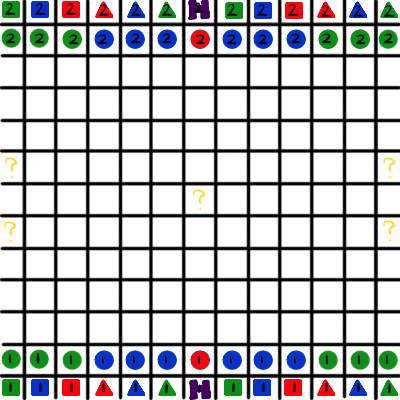 CHOOSE YOUR KING
TEAM 1: UNDECIDED
TEAM 2: UNDECIDED
Spoiler
Show
If this would make more sense in Forum Games I wouldn't mind putting it there instead.
Top 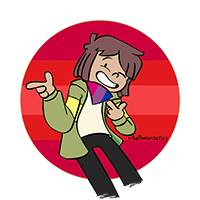 Anyone can give commands for either side. Each side must designate a boi as king to start.
Top

Ohhhh gotcha, I nominate the left most red square as team one king them 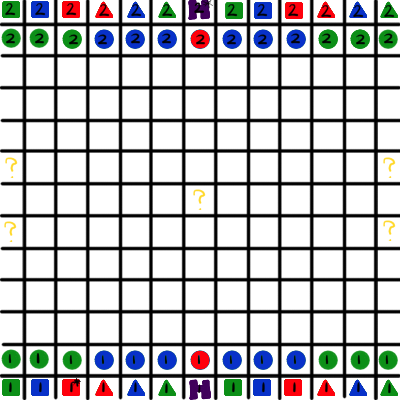 THE COIN IS FLIPPED (HEADS FOR TEAM 1, TAILS FOR TEAM 2):

Commands: The 3 right most triangles are sent 3 steps forward, starting with the red triangle, then the blue, then the green

Spoiler
Show
Tensions have been rising between the two kingdoms of boi for a while now, limited resources of items have forced both parties to venture into no man's land. The new king 'Rhed Saire' of the 'owne' kingdom sends a scouting team. This scouting team is comprised of a tag team of bois, cobbled together from the last remaining military each kingdom has:

Codename 'rightAngle' [RA] has been harden by such wars before, rising to the red rank over countless years in the war business. The leader of our team
Codename 'aquaAcute' [AA], a taction expert on this team to keep it from falling apart, not their first rodeo having been in blue rank for a while, but this time they feel like they can prove themselves on the battlefield
Codename 'equilateralDegrees' [ED], the newest recruit on this team and the protagonist of our story. They're the lowest rank of green, but nonetheless on this team due to the limited number of soldiers. Their optimistic outlook however, could be enough to keep morality high.

And thus, they set off into the barren wasteland 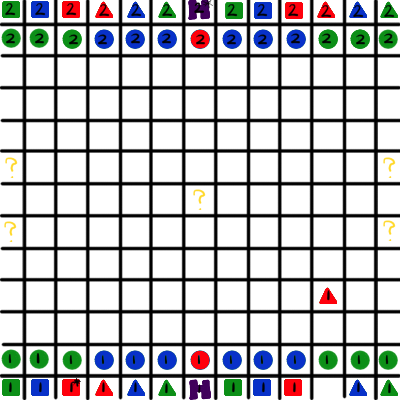 Codename rightAngle takes his mighty leap over the round boi (Private vertRadius) in front of him. Many of the lower ranking soldiers had never met the high ranking triangles, so they assumed codename rightAngle was a more literal title than it ended up being - unbeknownst to them, he actually got that name from his time spent serving the navy, when on one fateful night their sextants had failed, and using nothing but his knowledge of the stars the intrepid triangle managed to derive the right angle that would send the crew home. There are no literal right angled triangles in either nation currently embroiled in this war - in fact, the condition is highly elusive, only presenting itself in 1/9 baby triangles born. 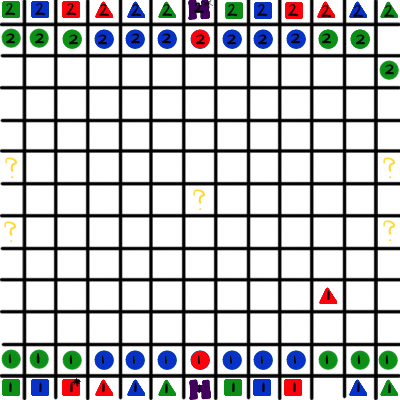 The opposing army (who call themselves TEAM 2, for some reason) send a scout to probe forwards. Looks like they're headed for that item. 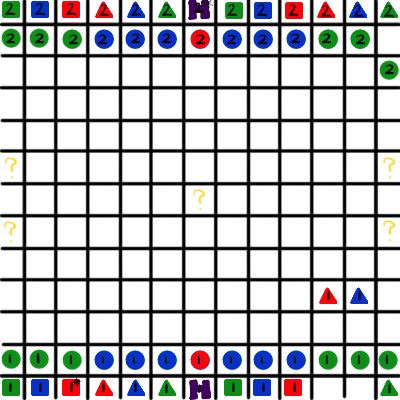 aquaAcute does a solid leap over the front line as well, keeping pace with the squad leader. The line of low ranking green circle bois are mighty impressed. 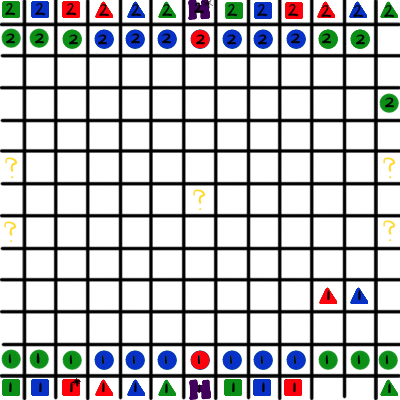 TEAM 2's green scout continues their beeline for the item. 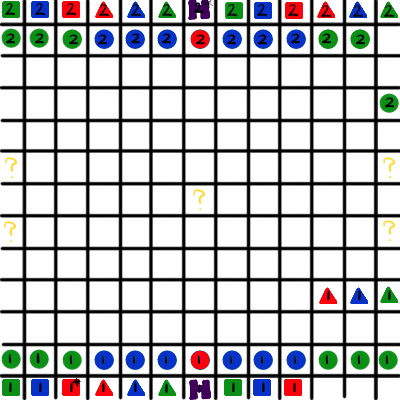 Our protagonist, the plucky ED (no relation) sees what the opposing green circle is planning and makes his mighty leap to stop the enemy from gaining access to the item. 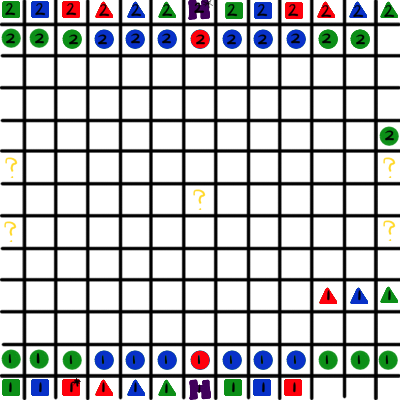 The green circle continues his advance unconcerned of reprisal from TEAM 1.
Top

wait are you getting commands from somewhere else? or are you just making some up for team 2?
regardless, team 2's green boi will move forward and obtain that item.
Top

Commands (in order):
Spoiler
Show
ED, plucky as ever, moves up to take the item first, unaware his unit wouldn't even be capable of it. Fortunatly AA picks up on this straight away and quickly follows from behind to support the private

[AA] Ed! What the hell are you doing we're a scounting party. The last thing we need is conflict against the TEAM 2 kingdom
[ED] But the item! That's what we're even here for right? Come on I can beat him it's just-
[AA] No! no you can't, you're a triangle you can't... ugh look. You wanna help? Go east, there's an item there
[ED] What?? but there's
[AA] He's already taken the item it's to dangerous, you have to get out of here you're right in the combat zone. Plus you're the only one our of all of us that can take it anyway
[ED] But-
[AA] Just go!!

>That green circle should grab the item.
>Next turn should use it if appropriate. Otherwise, send another green circle as backup.
>Either move the backup green circle closer to the one who grabbed the item or have the item green circle retreat. Whichever seems more appropriate.
Top
Post Reply
11 posts • Page 1 of 1