Prologue
~
The Beginning of the Slaughter
We start off by commemorating the old poll, hosted on Twitter's shitty, easily bottable poll feature. The Create-a-Card Poll pits 16 archetypes against eachother, in a bracket format. That's right, it is the tournament arc of Yu-Gi-Oh! card archetypes. The winner will receive new support for the archetype in question with one card. Naturally, everyone wants their archetype to get new cards, especially since most of these archetypes are old and no longer see much use. The Yu-Gi-Oh! TCG Twitter dot com account began its poll in early August, beginning with The Weather vs Graydles. Adorable painter girls themed after the weather, vs their eternal opponent- little green (gray?) men from outer space. The Weather beat Graydle 56% to 43%, to the dismay of alien fanatics community wide. Some cried out for mercy, others simply thanked the Weather Painters for a good game, others were outraged; betrayed by their own community, who would vote a 'waifu archetype' over quirky alien boys. Graydle had lost, but...it was not over for them. Not quite yet. For you see, a storm was brewing in another poll, some 3 days later.

Valkyries vs Inzektors. One was another supposed 'waifu archetype' sporting fans from all walks of life. Whether these were "simps" clinging to a deck featuring hot women, is not quite possible to determine. Many of them, surely, had to be those who simply enjoyed the playstyle of Valkyries. Every archetype supports a unique playstyle, and every unique playstyle finds its fans. Just as many might have been those who merely enjoyed the art of Valkyries. The other deck in this duel, were the Inzektors. Kamen Rider themed warriors with a thirst for justice, seeing fans who played them 8 years ago when they were meta, new fans who enjoy the playstyle, those who liked the art, and fans of Kamen Rider ready to support fellow bug-boy fans.

At first, Inzektors began strong. However, almost dreadfully quick, Valkyries caught up and then some. Soon, they took the lead...by several thousand votes. In about 2 minutes. Naturally, there was skepticism on both sides. Were bad faith voters ruining the reputation of Valkyrie players? Without evidence, everyone was forced to move forward with the poll. Valkyries got an even bigger lead, until a whistleblower stepped forth. "Valkyrie players are buying votes! They're using bot accounts!" He cried...and he had proof. A fan was using money to buy thousands of votes. There was an outcry! Some Inzektor players fought back, though not nearly as hard as Valkyrie was fighting. Some Valkyrie votes got deleted, however the bots quickly trivialized those lost votes. People called for disqualification, recounts, anything from Konami and the Yu-Gi-Oh! TCG Twitter dot com account to do something.

However, both were silent.

They let Inzektors take the loss. 56, to 43%. 18,000 votes extra compared to Weather vs Graydles, which stood at 27k votes. Everyone was angry. Some bad-faith Valkyrie voters stirred the pot, calling it a fair victory. Others maintained that both sides should be disqualified. The Yu-Gi-Oh! TCG Twitter dot com was quiet on this matter for 4 days, until they announced that the poll would be redone. Graydle voters were ecstatic, Inzektor players were ready to come back. Valkyrie players were salty. And so...

Chapter 1
~
The Salt Rises
Unlike Valkyrie vs Inzektor, the Weather vs Graydle poll was more or less entirely fair. Tragically, Graydle's only hope was quickly dashed. They would not be getting a new card. 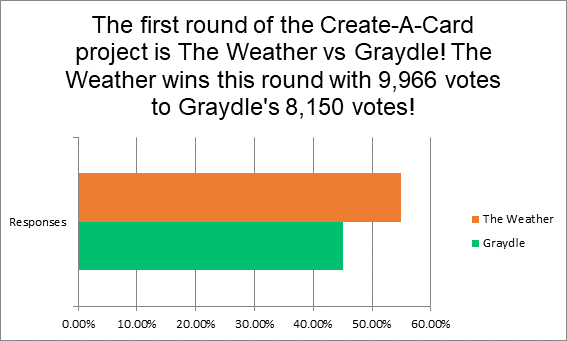 However, the same could not be said for Inzektors... Predictably, Valkyrie players, without their bots and paid votes, could not compete with the sheer justice and scornful votes from those who did not much care for Valkyrie's first "win." In record numbers, Inzektor Voters came out of the woodworks, demolishing Valkyries 12,000 votes to 7000.

Most Valkyrie players took their true loss with grace. Some very vocal minorities were not too happy. 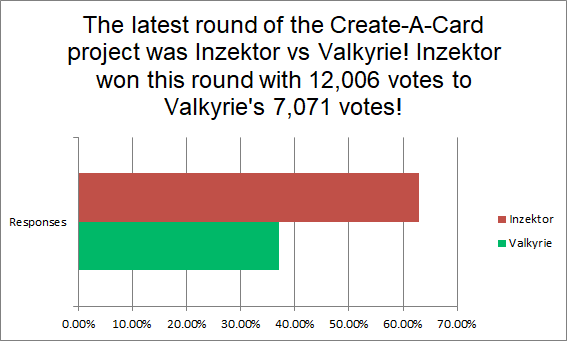 Throughout these events, several factions have sprung up- Hazy Flames, Inzektors, and Frogs. Hazy Flames showed their hand after this poll.

X-Sabers vs Fire Kings. Fire Kings being a deck focused around fire monsters. Not very popular compared to their opponent, X-Sabers, themselves not being that popular in this poll. Hazy Flames, also a fire based deck, revealed their support for both Hazy Flames AND Fire Kings. If either wins, they both do. Alas, X-Sabers fame outdoes Fire Kings fame, in the closest poll so far: 7000 to 6400. 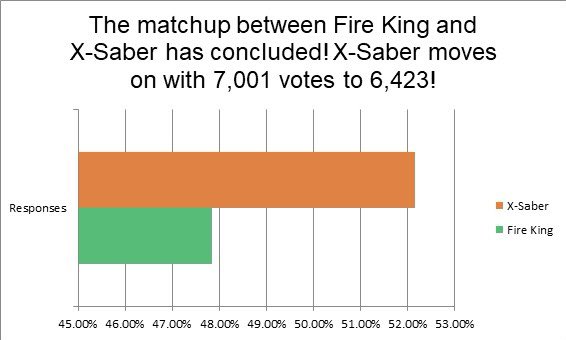 "I can't believe you voted for hand-loops!" Detractors say, disappointed in their loss. Hazy Flames, however, was undisturbed. They still had their main flame, after all...

Mermail vs Photons brought the community together, as many thought. Mermails had popularity for awhile, as many believed Konami and the "ignorant" community loved Mermails and Lightsworn far too much. Mermails are even still considered good in casual games. As such, many were VERY QUICKLY turning their votes against Mermails. One of the two main decks people thought would win. However, this was the tournament of upsets. Inzektors beat Valkyries, after all- anything could happen. And anything DID happen. With a whopping 4000 vote lead, Photons took Mermails to the market, and sold them up the river. 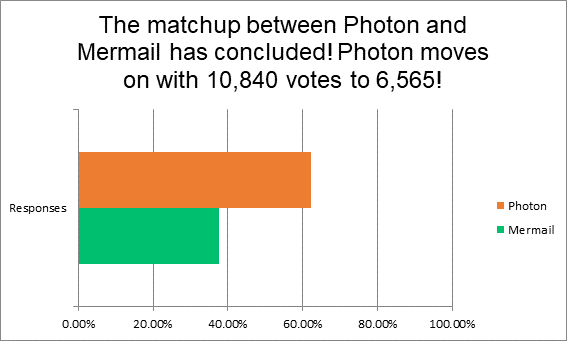 Many were satisfied, but some maliciously poked and prodded the other side, callously celebrating on small victory. They had gotten one of their biggest enemies out, and they were far happier than any other, except maybe Inzektor voters. At the end of September, Photons were on top- on top of Mermails grave, that is. Everything was fine.