Behold! A magical world which is many cliffs with both floating islands and land hanging with chain, be a magical wizard here and remember no OP things
Last edited by eldritchCorvus on Fri Jan 17, 2020 12:25 pm, edited 1 time in total.
I'm the local alien ceiling cat
Top

Ethereal flower petals dance about upon a sudden light breeze. Before fading, they herald the near silent footsteps of a tall, long haired stranger. They wear a colorful flowing outfit that somehow manages to be light and mobile enough for travel.
Perhaps by magic?

"...So the prophecy is coming to fruition, I see?"
The stranger speaks to the hooded figure in a resonant voice.

"It seems like it" The hooded figure says, before removing his hood from his head to reveal that his head is a crow head
I'm the local alien ceiling cat
Top

The Queen of Crows comes up beside the de-hooded figure astride her giant butterfly steed. She also has the head of a crow and a floating crown around her head signifying her status. The company of butterfly-riding crow knights gently push the air around, hovering above the gap.

When we droppin boys. That gorge ain’t getting any deeper and I gotta oversee this prophecy shit before my meeting with the neighboring Floating Island.

The stranger winks with a smirk.
"Boy? I haven't tried to fit myself in that square hole for years." they tip their floppy Carmen Sandiego-esque hat and with a flourish of the hand out to the side, wings made of light unfurl from the stranger's back! Dazzling glowing feathers radiate outwards, some falling astray in splendor.
"Now, let us ride!"
And with that, the stranger lifts their feet from the ground and gracefully flaps their massive luminous wingspan, preparing to fly with the party.
Last edited by lavendersiren on Sat Jan 18, 2020 12:16 am, edited 1 time in total.

Every stated character flies downward, lead by the three main and unnamed characters. The Queen, known among her closest compatriots as Ipkeni, flies ahead. She sees, with her avian eyes, the goal of the party. In the distance lies the dilapidated bones of a once beautifully painted temple. And at the bottom of the temple is the summit of the Mountain of Prophecy, leading to something few modern people have ever had a chance to see.

The Surface of their planet.

The knights create a blanket of wind from the wings of their steeds. What little fog was left dissipates, leaving the temple clear to see. Ipkeni groups up with her two compatriots.

So we're finally at the surface of the planet, I thought I'd never be here The unhooded figure says as he is on the butterfly with the queen
I'm the local alien ceiling cat
Top

The stranger looks out at the land beyond the cleared fog. They almost gasp in awe at the sight. They mask this sense of wonder with their usual deceptively cool composure.

"It truly is the stuff of legends. It is not every day that such an opportunity is afforded."
A deep breath between illuminated wing flaps. The illusion is powerful enough to lift the stranger effectively, but it is somewhat taxing to sustain such a method of flight. They may need to rest a while after their flight.
With expediency in mind, the stranger thinks of what they remember from their (admittedly bare-bones) prior research.
"Beyond this point, we must be careful, if the warnings from the ancient documents are to be trusted." 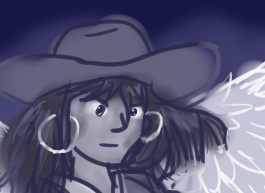 "...There is a powerful magical force sleeping in the core of that temple."

The stranger continues on the same trajectory with the others, wary of the challenges ahead, but determined to see things through.

Prophecies are important to fulfill, after all.

"Thanks for the tip" The unhooded figure says "By the way have I never asked you what your name was?"
I'm the local alien ceiling cat
Top

Good on you, Ignacia.
Ipkeni points to a platform of the temple.
If I remember the prophecy correctly, you're the one who has to actually step on the thing. What with your ability to use magic to make wings and such.

"Thank you, I chose it myself." Ignacia replied to the unhooked figure.

The detail about having to be the one to open the temple is a detail not lost upon them.
One has to get to a great level of magical prowess to pull off a hard-light illusion.
Ignacia had pursued the study of advanced illusion magic for this very reason, though the road was wrought with doubt for them. Personal reasons pushed them onward, despite everything.
Ignacia eventually did achieve their goals, but soon became obsessed with the prophecy, found in an obscure tome. Through their studies, they had realized that it was still to be fulfilled...

"...'One with the power to be moved by light would be the one to open doors. With the company of powerful allies, the temple of Otha shall awaken once more'... so the prophecy has foretold."
Ignacia recites part of the prophecy as they descend gracefully towards the ritual platform.
However, such grace is fragile as it is beautiful.
Ignacia lands, but the spectacular flight has exhausted much of their reserves. The silver feathers disperse into twinkles of light, which fade back into the mostly cleared mist. They kneel, breathing heavily.
"...give me a moment, to catch my breath," Ignacia strains between inhales.

Queen Ipkeni nods and opens her mouth to agree on resting, when one of her knights flies closer to her and whispers in her ear. It seems he received a telepathic message from...

That son of a bitch arrived at the palace NOW!? For the love of--we JUST got here! The Queen has to be here for the prophecy shit, I know my history and I know HE does too. So send him a message and tell him to fuck off because goddamnit the world doesn't revolve around him. It revolves around the CORE, and we haven't seen it in a MILLENNIUM because the prophecy keeps rebooting every hundred years because of SHIT LIKE THIS keeping all the necessary players off the board!

The foul-mouthed queen squawks some more in outrage. It is hard, being the Queen at the age of 14. She's practiced for this moment for most of her life, preparing to be here in her mother's stead after she disappeared. Ipkeni's certain her mom's out there somewhere, but in the interim someone has to run the goddamn Crow Island so it may as well be the youngest daughter lol. All her sisters are off on Diplomatic Missions so she's all that's left to hold the fort in the homeland.

Shall I recite everything you said or simply the gist of it, ma'am? The knight asks after Ipkeni calms the fuck down.

Yeah you should probably edit the profanity out. Make it sound like one of those tax notices you send out even, that'll piss him off.

Ignacia reaches for a bottle from a hidden sachel.
Inside, is a jar of apple juice.
It's not the most powerful drink for recovery, but it helps.
They unseal the jar and take a swig of the fruity beverage.

Ignacia puts the jar away again, now holding only half as much.
They stand up once more.

"Alright, I'm ready."
They look to the left and the right. To the queen and to the unhooded figure.

"I do hope you all are prepared for the next phase after this. I cannot do this on my own, after all."

And with that, Ignacia closes their eyes and begins to recite an ancient longform spell while standing upon the ritual platform.
Waves of crackling energy begin to dance outward, following the cracks between stones. A slight hint of ozone scent in the air. Hair and feathers alike may begin to stand upon end in this electrified space.

However, this is still only the calm before the storm.

Ignacia continues to recite the longform spell, as it slowly begins to build in power.

(Did I do a good job at naming my dude?)
I'm the local alien ceiling cat
Top

(You did fine! It gives us an indication that his character is kind of conceited though, so if that wasn't what you were going for then oops)